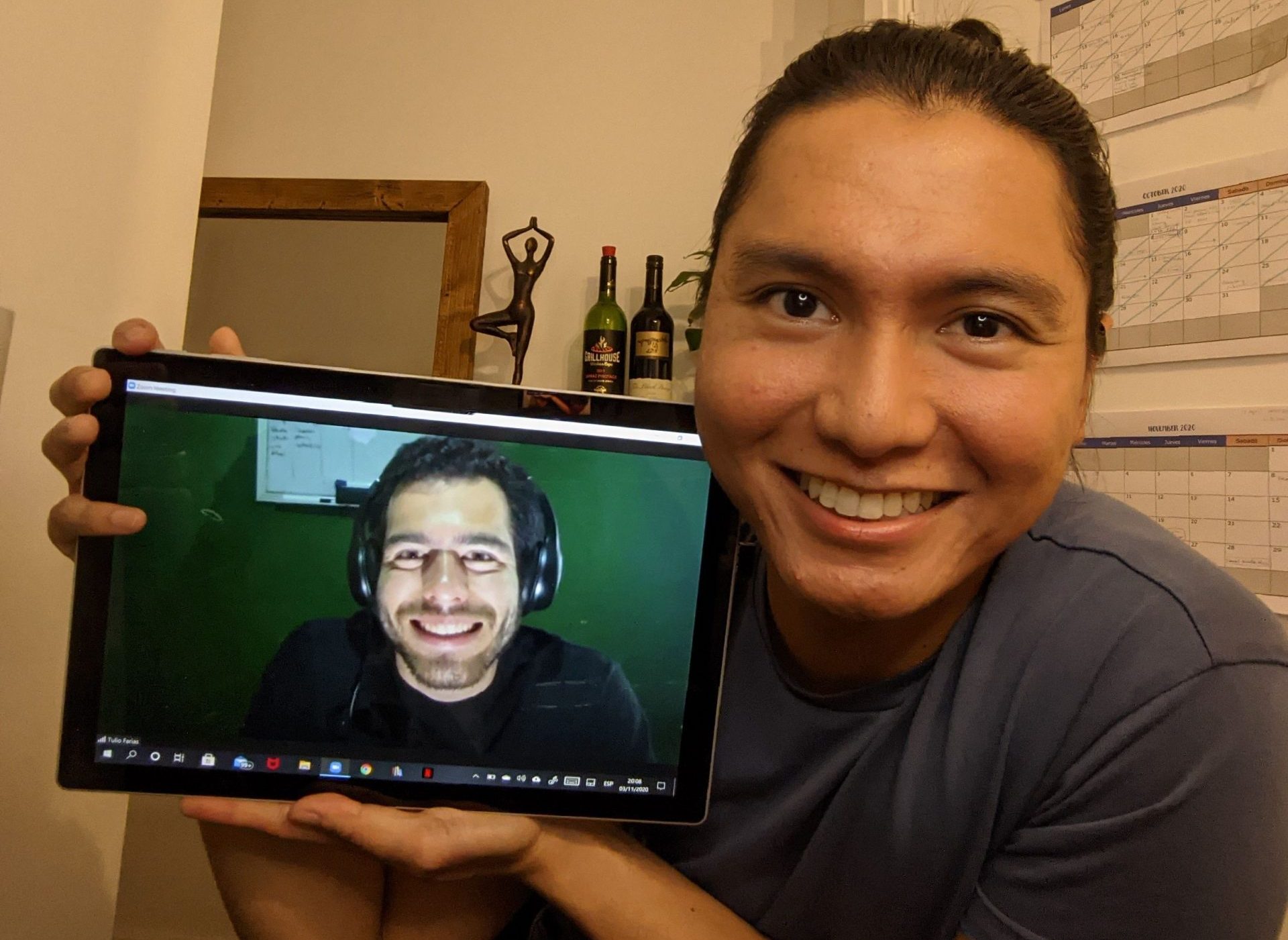 Previous attempts at learning Spanish via Duolingo and traditional grammar books didn’t work for JoJo. In January 2020, she decided to sign up for BaseLang’s Real World program, with the the goal of becoming conversational in 3 months.

This is her story.

BaseLangStories series puts the spotlight on BaseLang students – asking them about their motivations for learning a foreign language, what impact learning Spanish has had on their lives, advice they have for fellow students, and more.

So, can you tell us a bit about yourself?

Hi! I’m JoJo. I am a Filipino. I live in London. I love dogs and cats. I am into Reggaeton music. And I support BaseLang!

I am a fan of beauty pageants.

They have a huge following in the Philippines besides basketball and boxing (“the 3B’s). Would you believe I used to binge-watch Spanish beauty pageant-related clips in YouTube even if I didn’t understand any single word? Ha ha, that’s how fanatic I am! Countries like Venezuela, Colombia, and Puerto Rico, are known in this field.

Fast forward to December 2019, I was watching Miss Universe (an international beauty pageant) and the representative from Puerto Rico (Madison Anderson) caught my attention.

In her opening speech, she said that she learned Spanish in just three months!! (She grew up in the United States).

That resonated in me and it made me think: “Can I also learn Spanish in three months?”

Then in January 2020, a colleague, who just came back from a holiday in Barcelona, proudly shared with me how he served as a translator for his friends. No one but him knows basic Spanish in their group, so whenever they order food at a restaurant or enquire something from a store, his friends ask for his help.

His anecdote inspired me, especially because I know that he just had an hour per week basic Spanish class during the last quarter of 2019.

If he can do it, I can, too! So, with excitement and enthusiasm, I made up my mind and set my goal: To be conversational in Spanish in three months!

In the past, what did you use to learn Spanish?

In 2016, I tried Duolingo to learn some basic Spanish. I think it lasted only for a month or two – I ended up getting confused. Ha ha ha ha!

In 2017, I bought a Spanish grammar book from Daunt Books, a fancy bookshop in London. It just ended up gathering dust in my bookshelf.

Before BaseLang, which part of learning Spanish did you struggle with the most?

I started BaseLang with zero Spanish (although I have some words in my native language, which are Spanish-derived).

I tried Duolingo, but I ended up getting confused with the verbs as they were appearing in various forms! (Back then I wasn’t aware that verb conjugations in Spanish depend on the subject. lol).

That might be the main reason why I stopped trying.

What obstacle would have prevented you from signing up for BaseLang before?

I learned about BaseLang from a British colleague in 2018. It was fascinating to hear him speak in Spanish, and I was like “oh probably I could do that too!”. But he told me he spends 30 minutes to an hour on his BaseLang classes every night during weekdays. And with my work and personal schedules back then, I thought that was too much for me.

During the early quarantine days of the pandemic, I was taking 5 hours of classes straight every night and I’ve never been bored at all with my professors! It was just like catching up with my friends via Zoom – the only difference is it’s in Spanish. =)

Thanks to my professors: Alberto, Siam and Tulio, I managed to breeze through the lockdown and quarantine and stabilize my mental health.

What did you find as a result of signing up?

1) I found out that learning a language virtually online can be as effective as in a traditional classroom setup. My classes were all via Zoom and I quickly got used to video conferencing. (This was in January 2020. So, in a way it kind of prepared me too for all the video conferences at work throughout the quarantine days).

2) Also, I realized that learning Spanish is not just limited to use of grammar books. I learned more Spanish through interpreting music and news articles in my classes, and also through the day-to-day conversations with my professors. We talk about food, history, science, geography, culture, and life in general.

What specific feature did you like the most about the Real World program?

Classes in BaseLang’s Real World program (same as the other BaseLang programs I think) are unlimited for a fixed monthly fee. That means a student won’t have a reason to not take a class. Usually, a person spends a total of an hour or more per day browsing through social media threads, so for sure if you have the discipline, you can take at least 30 minutes of Spanish class per day, at a minimum.

I also like that you can drive your own classes.

You can freely advise the professors of how you like the classes to be run – you can focus on a specific grammar lesson, or you can just talk about or enquire of a Spanish article, video or music you’ve encountered. Classes can be tailored based on your learning style and the professors are always very accommodating and lovely!

I would say that learning Spanish expanded my horizon: both externally and internally.

I become closer and developed a closer rapport with my Spanish-speaking friends as I moved along my journey learning Spanish.

Quick anecdote: There was a day when I visited my friend from El Salvador and her Venezuelan partner. I wasn’t expecting to just speak in Spanish, but since they know I’m learning the language, we had our conversation the whole day in Spanish! It’s when I confirmed that my Spanish classes work (and my professor was very happy about it, too). Ha ha.

I also follow social media pages in Spanish now, and it feels like I’ve unlocked a new dimension.

Not known to many, the Philippines was colonized by Spain for 300 years – it was actually named after a Spanish king. We don’t speak Spanish, but our national language (Filipino) and some dialects have huge Spanish influence.

I am aware that we have a lot of borrowed words from Spanish [e.g., the days of the week (Lunes, Martes, Miyerkules…), the way we count money (uno, dos, tres, kuwatro…), stuff at home (kwarto, kama, kutsara, tinidor, kutsilyo, etc.], but I did not expect that I’ll discover more through my Spanish classes. Most of the time, it’s like having a “eureka” moment. Here are some examples that I still remember:

Overall, my study of Spanish did not only orient me to a new language, it also gave me a better appreciation of my own.

Would you recommend the Real World?, and if so, why?

I actually have already recommended BaseLang to my friends! And two of them became regular students, as well.

BaseLang, per my experience, is a flexible platform that can surely fit into your schedule. You just need to develop your routine and have the discipline to commit to it. With a lot of available professors, definitely you can find someone who matches your personality and learning style.

Anything else to add (advice for other students, what you wish you had known beforehand) etc?

My first advice, if you have an interest to learn Spanish and you’ve come across BaseLang, don’t think twice. Register. It’s worth it! =)

And once you start with your lessons, especially if you’re like me who didn’t have basic Spanish, don’t be too hard on yourself in case you get confused with the syntax or grammar rules.

In my case, on my first month (January 2020), I had difficulty picking up verb conjugations and it got worse when I moved to object and indirect objects. Ha ha ha. But my professors were patient with me and I never gave up.

I continued my classes, even if there were days when I did not understand anything (true story. Lol). It was frustrating sometimes (honestly), but I held on to my belief that the day will come when all will fall into place! And it happened towards the end of my second month!

On my third month, without realizing it, I’ve been talking to my professors in straight Spanish (I still make mistakes from time to time, but I know that’s part of the learning process).

Persistence, discipline and dedication are key! And be curious! Always ask questions from your professors (there are no such thing as stupid questions)!