Take as many one-on-one online Spanish classes as you
want with our professional teachers, for just $149/mo.

WHEN FACE-TO-FACE WITH A REAL SPANISH SPEAKER, DO YOU FREEZE?

If you’ve learned any Spanish before, you probably focused on learning the “stuff” of the language - grammar, vocab, perhaps pronunciation.

But what good is all of that intellectual knowledge if you can’t effortlessly use it in real conversations with Spanish speakers?

Sure, you know the stuff. But if every time you go to form a new sentence, you are searching your brain for the right sentence structure, the right conjugation, that word you can never remember...

...then you have a problem.

Your Goal is to Have Natural Conversations
With Real People... Right?

Then you not only need to learn the grammar and vocab, but become confident using it.

So if you’ve done the entire Duolingo curriculum...
Listened to the Pimsleur tapes...
Taken academic classes...
Memorized hundreds of words of vocabulary...

It’s not that you aren’t good at languages. It’s that you’ve been skipping half of the entire process - speaking!

There Are TWO PARTS to Becoming
Conversationally Fluent in Spanish

Part one is learning the “stuff” of the language (the vocab, the grammar, the pronunciation, etc).

Part two is becoming confident using that stuff by having lots of conversations.

No Matter How Much Time You Spend on Part One,
If You Don’t Have Lots of Conversations,
You’ll Never Become Conversationally Fluent.

That’s where we come in.

At BaseLang, you get unlimited one-on-one Spanish tutoring with professional teachers, over Zoom video chat, for just $149 a month.

We focus on getting you from zero to conversationally fluent, so you can:

“I just started using this and I'm gobsmacked. The one on one is phenomenal and your teachers are very patient, fun and you can tell they really enjoy teaching. I actually come off the calls thinking ‘I might actually get the hang of this’.”

“So I've been going hard for the past 5 days and my progress has been AMAZING!”

Watch the video for the details, including how we hire our teachers and a platform walkthrough, or just read the bullets below for an overview. 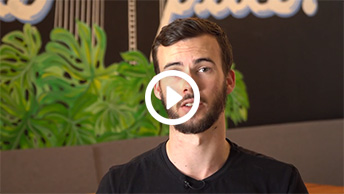 Classes are available from 6am to midnight Eastern US time. We maintain high availability.

Classes happen one-on-one over video chat, so you can take them on almost any device, anywhere in the world.

You can book classes at the very last minute (literally). Or, book five days in advance to plan ahead.

You can actually take as many classes as you want. There are no limits, ever. Some people take 5+ hours a day!

Your first week is $1. After that, you’ll be charged $149 each month unless you cancel. Pay with card or PayPal.

From complete beginner to advanced speaker, we adapt specifically to your exact needs.

Want to use our teachers for conversation practice only, or use your own curriculum? No problem.

We give you everything you need, including flashcards that align with our lessons and review materials.

“I love being able to schedule tutoring sessions without the guilt of 'there goes another $$$'. I just pay my monthly fee and learn as it works for my schedule. Brilliant.

Secondly, thank you for hiring such extraordinary tutors. They are smart, fun, and so encouraging. I was desperately looking for these qualities in a tutor for several months, and I’m so grateful to have found those qualities in your tutors.

Thirdly, you have great lessons! I’ll admit this was the part I was most apprehensive about. I prefer learning Spanish grammatically, but I need to be forced to actually speak it... I didn’t really think your lessons would address my questions—but they do! Your tutors give me more than the typical 'That’s just how it is said in Spanish', which is so exciting. I love learning about the nuts and bolts of the language, and I’m so thankful that Baselang provides that while also pushing me to speak Spanish. Thank you."

“I thought I should send a message through to say thank you. I've had a pretty horrible time with languages, I studied Spanish for 5 years at school, French for 3, got dropped from a Farsi class because I couldn't keep up, lived in Sweden for two years and failed to pick up more than a few words. Confidence in my ability to learn was effectively null. So last December I decided I'd learn Spanish on the basis it was the one I surely had the greatest chance with. Mostly just to prove to myself that I am actually capable of learning a language at all.

Last week I met an Argentinian. We spoke for two hours straight. In flowing Spanish.

That is completely down to BaseLang and Sergio, one of the best teachers I've ever had in my 20 years of education. My progress was unbelievable and I cannot even begin to describe how grateful I am to him and to your team. I've been recommending you in person, on reddit, to everyone from the Add1Challenge, pretty much anywhere I can, but thought I should tell you directly.”

If at any point in the first 35 days you don’t absolutely love BaseLang, we’ll not only give you a full refund, but we’ll send you $20 for wasting your time.

We get a lot of questions about how long it will take to get to a certain level with BaseLang. Here’s our best approximation:

How much time will you spend per day?

*This is an estimation based on our experience teaching Spanish and not a guarantee (read our guarantee here). Results may vary for many reasons. While we believe our methods to be the most efficient and cost effective available, BaseLang is a tool and results depend directly on the effort and time spent by the student.